There are a lot of "gift" books out there, mostly filled with nice sayings about sisters or Jesus or the meaning of life. Some are filled with lovely photographs of the ocean or historical information you never wanted to know. 100 Ghosts is the kind of gift book that is filled with jokes, but unfortunately I think author Doogie Horner misses the mark he sets out to make.
100 Ghosts: A Gallery of Harmless Haunts is, to be fair, exactly what the title promises; a pocket-sized encyclopedia of 100 examples of ghosts that are probably more scared of us than we are of them. Each one is a variation on the classic sheet over your head--perhaps the simplest of Halloween costumes ever to exist. Some are ironic or clever, some are just pop culture icons in sheets. So far, so good. 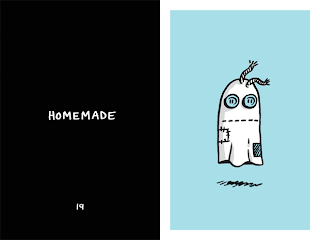 The prologue, however, promises something that it never achieves, namely that the book will prove ghosts are just like us and wouldn't it be funny if they roamed around the world trying to open jars and stuff? It's not to say that the jokes aren't funny, but I think this is a concept that would have or still could be better executed online, perhaps in a webcomic format. I read this book with my sister, with two of my best friends, with my boyfriend--and we all came to the same conclusion. This is the kind of thing we would find hilarious shared on facebook, or on a website where each ghost came with a daily post explaining its quirky life story. Horner achieves this with the graphs and charts on his webpage, where he posts the image and a small paragraph explaining the inspiration or idea behind it. Certainly, the Harry Potter ghost doesn't need much explaining, but why not do a whole series--further breaking the variations into collections. In fact, Horner has since done this three seperate times for EW magazine, creating Game of Thrones, Breaking Bad, and Orange is the New Black collections for the online version of the publication.
The prologue talks about pregnant possums posing a larger threat to you than ghosts in your kitchen...I would love to see Horner take that a step further and tell us what happened when he met each ghost. Perhaps, to keep things simple, he could pose their life stories in interview format.
Maybe I'm over-thinking this, but having flipped through the book several times, I keep coming to the same conclusion. That was fun, but I wish there'd been more.

Check out 100 Ghosts for yourself at Quirk Books' official site.
For more on author Doogie Horner, check out his site, too!
Follow my posts at IHOGeek for more reviews
Posted by Jenisaur at 11:51 AM No comments: